In my continued attempt to follow spring across the country, I had the distinct privilege of visiting our nation’s capital and in it the U.S. Botanic Garden. This garden is steeped in history as it was founded by Congress in 1820 and is the oldest botanic garden in North America. Of its vast collection, 240 plants were gathered in the 1840s during the Wilkes Exploring Expedition, or U.S. Exploring Expedition, which circumnavigated the world and made stops throughout Polynesia, the west coast of the United States, and Antarctica. Surely the 241 year old cycad living in Kew Gardens in London scoffs at how young the plants at the U.S. Botanic Garden are, but 176 year old plants are still really cool.

Although we had come too early for the cherry blossoms and spring had not quite sprung in D.C. or in the National Garden, the plants inside the Conservatory were in full bloom with every color under the sun. Here are some of my favorite plants and exhibits from this expansive “28,944 square feet of exhibition space.”

When you first walk into the Conservatory of the U.S. Botanic Gardens, your every sense is immediately assaulted by the colors, smells, humidity, and sounds of bubbling fountains. This conservatory is an eight part glass structure that was constructed in 1933 with 11 arches styled after the orangery in Versailles and a rear greenhouse designed after “the 1850s Crystal Palace in London.” When we arrived this spring, the garden was in the midst of its Orchids in Focus exhibit. This exhibit “highlights the world’s largest plant family and the USBG’s most extensive plant collection” and celebrates the plant that is not only diverse and colorful, but also “found on every continent except Antarctica.” The front of the conservatory is dedicated to orchids as well as other flowering, fruit bearing tropical plants, such as bananas, coffee, and cacao.

As you walk through the green house, there are sections dedicated to endangered plants from different areas of the United States. Of the endangered plants in the U.S., 1/3 are native to the Hawaiian islands, and many are endangered because of invasive plant and animal species. Two of the most interesting of these threatened plant species were Hawaii’s whisk fern (Psilotum nudum) and cabbage on a stick (Brighamia insignis). In Hawaiian whisk ferns are calls Moa nahele which means “forest chicken.” “Moa” means chicken, and this name refers to the fronds of the plant, which resemble a chicken’s comb. The plant was used for curing constipation and in treating respiratory conditions. My absolute favorite Hawaiian endangered plant is the cabbage on a stick. It’s only native to the island of Kauai, but is grown as a houseplant around the world. It’s considered a rare plant because goats, natural disasters, and the extinction of its only pollinator has made it pretty difficult to survive. The only way it can survive in the wild is growing on inaccessible cliffs and being hand pollinated by the people who climb those cliffs.

As you enter the conservatory, you are confronted with every color orchid under the sun.The orchid arbor had beautiful sight lines to fountains. 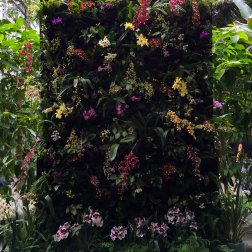 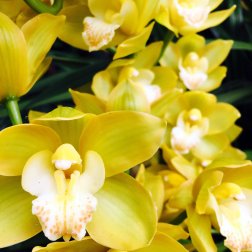 There were many pink and purple orchids, but these yellow ones were fr more stunning.

An exhibit to the left of the larger orchid display exhibited orchids native to the Americas. 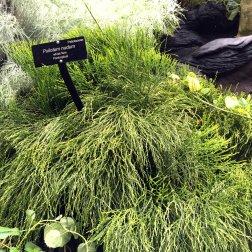 Whisk fern is native to all the major islands in Hawaii. It grows in both forests and urban areas.

The Hawaiian Cabbage on a stick is endangered because of the extinction of its only pollinator and because of invasive species of goats that eat them. The only way it survives is by growing on steep cliffs and being hand pollinated by people.

The tropical garden is directly in the middle of the conservatory where plants overtake the remains of an old plantation. The glass dome of the tropical garden is 93 feet tall and large palms, tropical trees, and vines rise to meet the sun. There is a “river” that runs through the middle of the dome and there are stairs that lead to a mezzanine where you can experience the vines, cacti, air plants, and flowers that live in rain forest canopies. Two of the most phenomenal plants in this part of the garden were the Emerald Creeper (Strongylodon macrobotrys) and Oncidium Heaven Scent “Redolence,” an orchid hybrid. The emerald creeper is native to the Philippines, and is one of the only flowers that is naturally jade green to turquoise blue. It’s a member of the legume family and is very closely related to kidney beans. Who knew bean flowers were so tropical and gorgeous? For those of you in the Atlanta area, you can find an emerald creeper in the Tropical Rotunda. Oncidium Heaven Scent “Redolence”  is an orchid hybrid that’s considered the “next gen” of Oncidium Sharry Baby, which smells like chocolate. It’s considered “next gen” because it smells exactly like vanilla.

The tropical glass house was filled with tropical trees, flowers, and vines.

Climbing vines bloom at the top of the mezzanine. 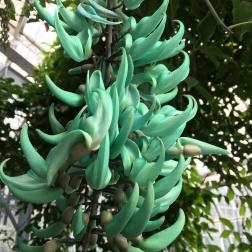 The emerald creeper is a legume flower that is naturally blue and green. 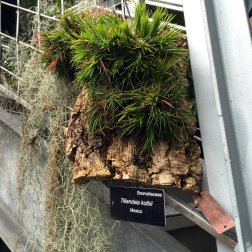 Oncidium Heaven Scent “Redolence” is an orchid hybrid that smells exactly like vanilla.

The world desert house was smaller than other succulent and cacti houses I have been in, but the variety of plants was a well rounded representation. There were many cacti, succulents, grasses, and trees from North America as well as Central and South America. Two of my favorites were the opuntia and the Euphorbia aeruginosa.

Opuntia, otherwise known as nopal, is a common cactus found in the United States and Mexico with 50 species native to the U.S. alone. The reason that opuntia is one of my favorite cacti is a cultural one. I grew up in a multi-cultural home that included many Mexican food staples specifically opuntia cactus, or nopales. Both the pads of the plant as well as the fruit can be eaten. The nopal fruit is produced after desert rains, which is when the opuntia blooms. After the flowers have been pollinated, the opuntia begins to produce tuna, or  prickly pear fruit. Prickly pear fruit is sweet, but the pads of the opuntia are more savory. Both the fruit and the pads have spines, so if you eat any part of this cactus, make sure you remove the spines first!

Unlike the opuntia, my favorite succulent from this trip cannot be eaten. In fact,  Euphorbia aeruginosa contains a sap that is poisonous to animals and humans and will cause skin and eye irritation or even blindness. Generally, I admire and covet cacti and succulents, but one of my favorite succulent varieties is euphorbia. In particular Euphorbia aeruginosa is interesting because it is native to South Africa and grows in shrub-like clusters in sandy, rocky landscapes. It’s body is vertically striped in green and black with red spines along the outside. During the late spring Euphorbia aeruginosa produces yellow cyathias, or “false flowers.” If these plants weren’t already cool enough, these cyathias are only produced by euphorbia succulents and are much more complicated than flowers.

Opuntia, or nopales, are cacti whose pads and fruit are edible. 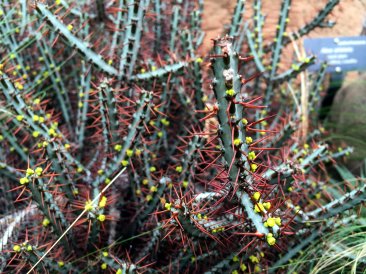 According to the U.S. Botanic Garden’s website, its mission is “to demonstrat[e] the aesthetic, cultural, economic, therapeutic and ecological importance of plants to the well-being of humankind.” The exhibits for the Mediterranean, edible, and medicinal plants truly underscore this mission. In learning how humans have cultivated, discovered, and interacted with the plants around them, I have a deeper understanding about where our food comes from and why we should covet and protect that knowledge. Both the coffee and chocolate industries rose from indigenous fruits of Ethiopia  (arabica) and South America (cacao), respectively; while many foods from the Mediterranean are now widely grown in all temperate and subtropical regions of the world. Cinnamon, a spice we like to put on our pumpkin spice lattes, was actually a medicinal bark used in Asia to treat gastrointestinal stress. According to the U.S. Botanic Garden, researchers are currently studying whether cinnamon “can be used to control blood sugar levels.” As I walked through these exhibits, I was struck by the importance food has not only to our bodies, but also globalization. As an entity the U.S. Botanic Garden is committed “to sustainability, educating the public about ways to live by supporting the interconnected web of life that is the environment, and in particular, by nurturing the plants that support the life on our planet.” It was a poignant experience to interact with the foods of the world and discover how these foods are not only pregnant with taste and tradition, but also how they are symbolic of our globally connected economies and ecology. Each one of these foods are widely distributed and are threatened by changes in their environment that are specific to industrialization and climate change. It was through these exhibits I felt particularly connected to these systems. I would highly recommend taking your time through these exhibits. You won’t be disappointed! 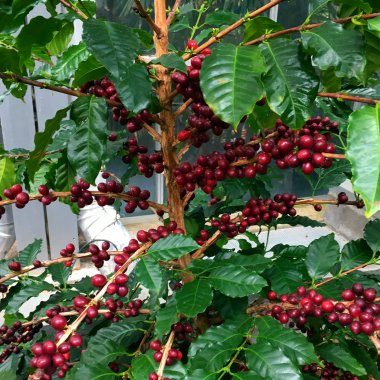 Pictured here are arabica fruits, which are dried and later create coffee beans.

Cacao is an orange fruit that comes from a flower smaller than your pinky nail. Its seeds are used to create chocolate. 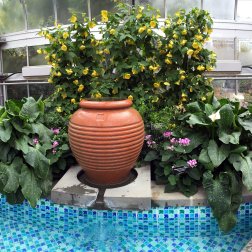 The Mediterranean garden was a tranquil placed filled with color.

Do you have questions about my visit to the U.S. Botanic Garden? Are you looking to plan a trip? Or do you simply have questions about your indoor and outdoor plant babies? Leave a comment below or feel free to contact The Garden Generalist. I would love to hear from you!

Can’t get enough of The Garden Generalist? Visit next week to read more about my pursuit to follow spring across the country. I’ll be featuring the Garfield Park Conservatory in Chicago, Illinois. I’ll be paying special attention to their Aroid and Desert houses.

Keep a watch on The Garden Generalist  instagram for sneak peeks of my visits to Cheekwood Botanic Garden in Tennessee, and– my absolute favorite gardens thus far– the Desert Botanic Garden and Saguaro National Park in Arizona. From there I’ll be taking you to Holland, Michigan for a Dutch “Tulip Time” Festival experience!

One thought on “Heavenly Delight in the US Botanic Garden”