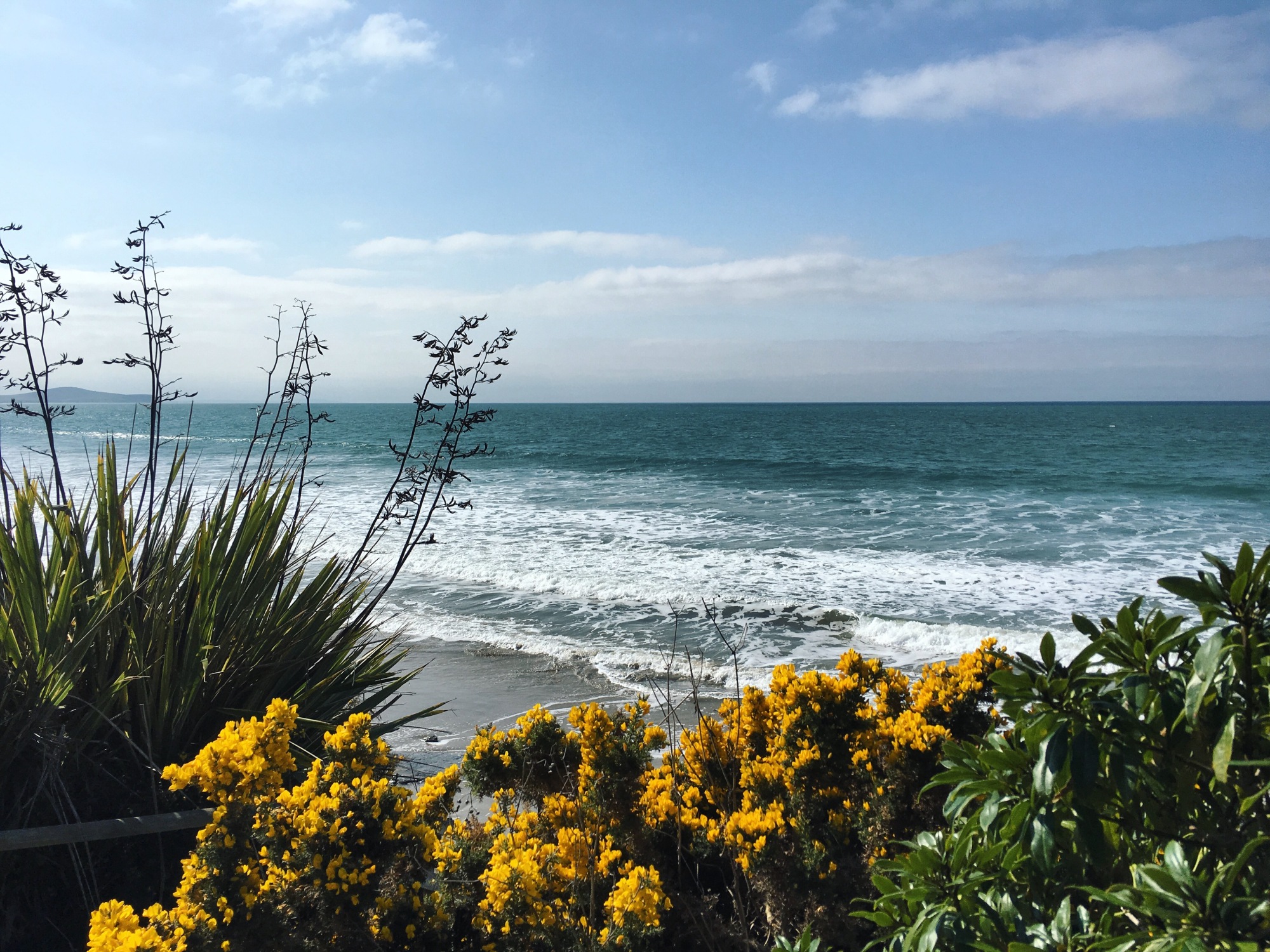 We left Hunua Homestead before sunrise to board a plane flying to Christchurch. The flight was barely 2 hours and I was stuck to the window nearly the entire time looking down at coastlines and the Tekoa mountain range. From the air the South Island was one of the most beautiful landscapes I have ever seen. I watched as mountains transitioned to flat farm land with tall trees delineating where one field ends and another begins and where rivulets of pale blue river water meandered through the fields and slithered to the ocean. Once we were on the ground, the South Island did not disappoint. 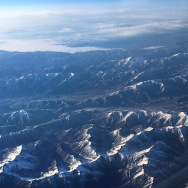 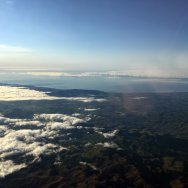 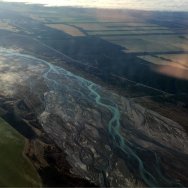 Upon landing in Christchurch we grabbed some breakfast at a diner near the airport and went straight to Christchurch Botanic Gardens. Spring was just beginning in New Zealand, so while the grounds were green, not all the flowers had sprung up. I spent most of my time in the garden’s 6 conservatories, which have a beautiful diversity of flowering plants.

The Townsend House conservatory was filled to the brim with ferns and bright pink, purple, and orange flowers that included one of the weirdest, coolest plants I’ve ever seen: Lady’s Purse, or Calceolaria. This little weirdo looks like a cross between a prim rose and an orchid with leafy, lettuce-like leaves and a bright yellow, pouched flower. I found out that it’s a temperate tropical plant native to Central and South America that blooms in late winter to early spring. It likes humid, cool environments which made the conservatory a great home! I was tempted to find where I could get it at home, but I’m not so certain that it would like, much less survive, a Georgia summer.

The conservatories had many other interesting features, such as the desert mural which is the back drop of the cactus and succulent collection in the Garrick house. The mural was painted by Gordan Gee who was a label writer at the gardens until 1974. The cactus and succulent collection itself was rather small, but had some interesting plant babies like a Copiapoa cinerea, which is a Chilean cactus that is prized for its ashen blue-green color. I have never seen a cactus like this one with its short black spikes. According to Wikipedia, this beauty isn’t often cultivated because it is sensitive to heat and watering, which very well may be the reason.

The conservatory I was most impressed with was Cuningham House, which, according to the website was originally the Winter Garden. This conservatory was filled with tropical plants including what was for me a shocker: begonias. I didn’t realize this until I saw them on the second story of this conservatory, but like most houseplants, begonias originate from subtropical and tropical climates. Needless to say their huge blooms made me reconsider this humble office plant.  The other plants that were particularly interesting were the Anthurium. While you can find Anthurium plants at a dentist’s office, I’d never seen such a variety including one called a pigtail Anthurium which looked a lot like a bract with a curly Cheeto in the middle.

Unfortunately I didn’t get to see much of the garden grounds because we were short for time. I did manage to find a field of hellebore flowers and a blooming star magnolia tree. I was particularly impressed with the star magnolia tree because unlike the magnolias in Georgia, these had pink petals that were stellate and looked like they were made of crepe paper. They were the most beautiful arboreal flower I’ve ever seen.

We then left Christchurch Botanic Gardens to explore the coasts. 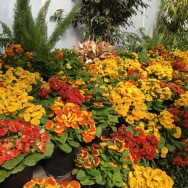 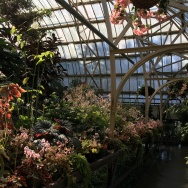 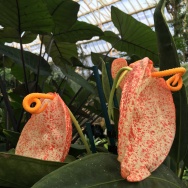 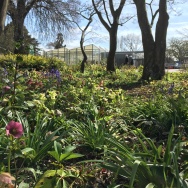 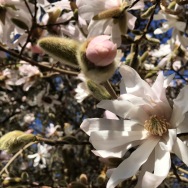 According to Maori legend, the Moeraki Boulders “are gourds washed ashore from the great voyaging canoe Araiteuru,” which brought the ancestors of the South Island Maori people to New Zealand. In the legend, this great canoe “was wrecked upon landfall in New Zealand hundreds of years ago,” and the gourds the Maori would have carried would have been used as eel baskets. Scientists have concluded “that the stones are concretions that have been exposed through shoreline erosion from the coastal cliffs” and are approximately 60 million years old.  These stones are unusual not only because of their shape, but also because “the centre of the concretion can be relatively weak, whereas the outer layers are the hardest part as they are composed of up to 20 per cent calcite.” Their insides are also completely hollow. You can find these guys on Koekohe Beach in Otago as well as an interesting beach plant Corokia cotoneaster, or wire-netting bush. These plants are native to New Zealand and help protect the country’s beaches through a landscaping technique called coastal sheltering. Using plants like wire-netting bush in exposed coastal areas helps to protect the beach and residences from erosion caused by coastal winds. I’ve come to find out that all of the plants used on the beaches, esplanades, and residential coastal areas, including ice plants, has been to prevent erosion.

The yellow flowers are Corokia cotoneaster, or wire netting bush. 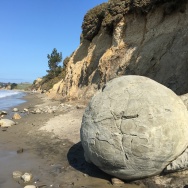 Moeraki boulders are shaped by the wind and sea and are completely hollow.

Taiaroa Head was another amazing natural area off the coast of Dunedin that is a protected animal reserve. Because the beach is home to many important animals, such as penguins, seals, and albatross, the Maori consider it taonga, or a sacred. The animals that live here are considered taoka, or scared treasures. I didn’t get to see the albatross (they were out to sea) or the penguins (they’re surprisingly nocturnal), but I did manage to be pooped on by a seagull and to see several juvenile male seals playing in the water. I didn’t come to Taiaroa Head for the plant babies, but I feel both plants and animals are sacred and that the concept of “land regeneration, wildlife protection, and environmental sustainability” is connected directly to our experiences with nature. 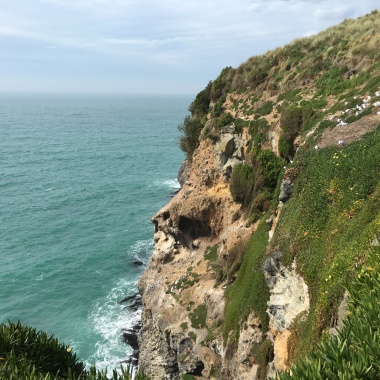 Our last few days in the South Island were in Dunedin, which is the sweetest, most well cared for city I have had the pleasure of visiting.  I felt completely at home in Dunedin and that homey-ness extended to their botanic garden, which was not only on level ground, but also sculpted into the high hills.

Their Winter Garden Glasshouse was the first place I saw in this botanic garden.  It was built in 1908, renovated first in the 1960s then renovated a second and final time in the 1990s, which restored the Edwardian architecture. As is the theme with most glasshouses, the Winter Garden Glasshouse has tropical, subtropical, and desert houses. All of these houses were exceptionally maintained and were in the midst of a change when we visited. I was particularly impressed by the rock garden which was several levels and was the crossroads for many collections. There were mostly small alpine plants throughout the rock garden and the plants became bigger as you walked closer to the top where the conifer collection transitions into the arboretum, which is full of deciduous and ever green trees.  I loved that the arboretum was full native New Zealand trees as well as other tree from around the world. Like the Redwoods and Whakarewarewa Forest, the arboretum began as a way to determine which foreign trees were best suited to grown locally in Dunedin. The arboretum still has its orginial collection Ponderosa pines that were planted in the 1870s! My favorite tree was the Pinus radiata, or Monterey pine, which is native to central California. I thought it was funny that I came all the way to New Zealand to find out I like a native California tree. 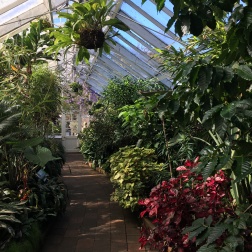 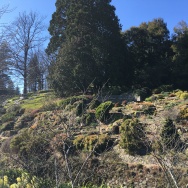 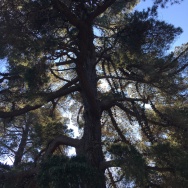 The final stop on my plant baby journey through New Zealand was Scarborough Park in Sumner, which is a coastal town southeast of Christchurch on the North Island. Even though this post was supposed to be all about the South Island it just felt weird putting the final leg of my journey anywhere but the final post. Scarborough Park was a nice contrast to the mostly rocky beaches of the South Island and helped me reflect on the diversity I had seen. Jeffrey and I spent nearly the whole of our final day walking around Christchurch and exploring Sumner. The esplanade along Scarborough Park took us to the beach where we found a small grotto in the rocks that made me feel like an adventurer discovering the ocean for the first time. All long the beach there were plants used to protect the coasts from erosion like ice plants, yucca, Aeonium, and protea.  These plants were used not only for their beauty, but also for their ability to withstand strong, icy winds coming off the water.  The leathery, hard texture of these plants’ leaves and flowers helps to protect them from the wind as well as from dehydration.

I was completely excited to see so many protea bushes in Scarborough Park because I had only ever seen different protea flowers either online as cut flowers. It was invigorating to see them vibrant and growing in the New Zealand spring. As you may have learned in my  #plantbabyspotlight, protea plants are native to the Cape in South Africa and are experts at conserving water and surviving drought. Their leathery leaves prevent dehydration and their blossom is made up of hundreds of small flowers. In South Africa they’re called sugarbrush or suikerboos in Afrikaans. Despite the fact that these plants have come to symbolize change, they haven’t changed much in many millions of years.  In fact, protea pollen fossils have been found that suggest protea lived 75 to 80 million years ago. They like more temperate, Mediterranean climates, which explains why the survive so well in New Zealand. Their ancient, somewhat bizarre look also lends itself well to New Zealand since all the plant life native to New Zealand is ancient and so much different than anywhere else on the planet. 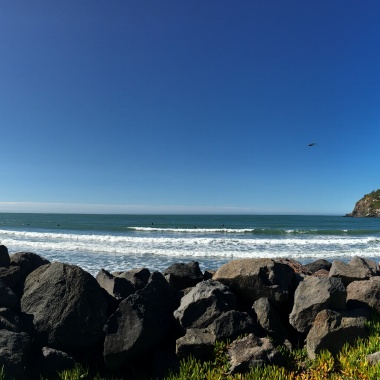 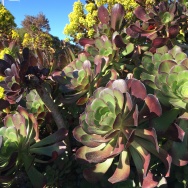 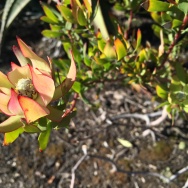 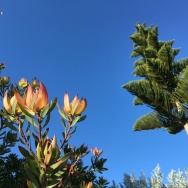 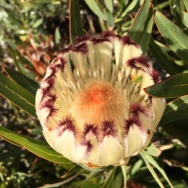 A week wasn’t enough to see all the natural beauty New Zealand has to offer, and I can’t wait to come back and explore what I’ve missed. New Zealand was truly one of my absolute favorite places I’ve been to so far and though I didn’t get to see all that I wanted I don’t regret a thing.

Since New Zealand I’ve been doing a lot of domestic travel from Denver to Chicago to San Francisco and I can’t wait to share it with you! To keep up to date on all my adventures, be sure to follow me on Instagram.